Last week was the school’s English week. The third grade celebrated it with a poetry recital. The ten students who won the place to be in the finals during the try-outs made an outstanding recital of the same poem (The Voice, by Shel Silverstein). The ten students did it great, but a jury composed of three ESL student teachers chose the three students that did it best: two girls (first and third place) and one boy (second place). The first three places won a medal, besides the book I bought for the first three places. The others won a participation ribbon. They did the poetry recital in front of some parents and all their third grade classmates. After the poetry recital, we enjoyed a cookies-and-juice snack together.

Here are some pictures of the poetry recital and a video of the student who won the third place: 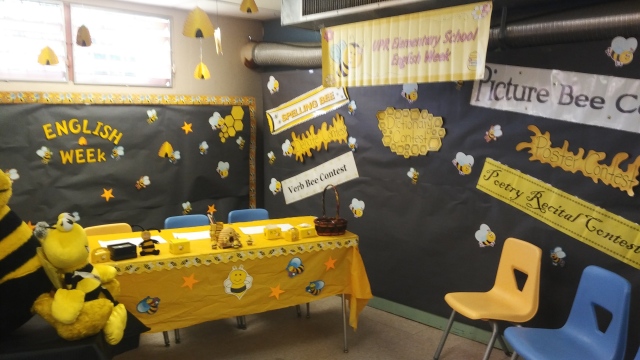 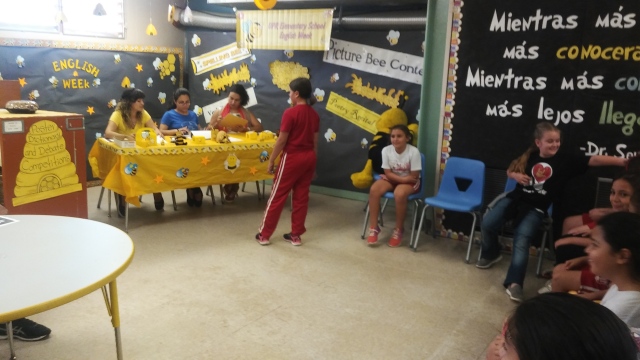 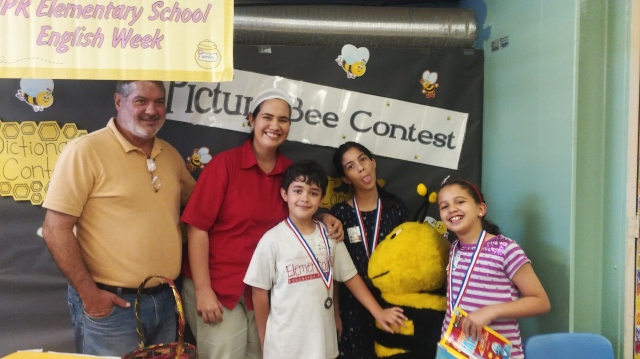 In the night between Friday and Saturday third grade had a sleep over night. That night was full of activities! Look at the pictures of the snack tables prepared by their parents, they were amazing!: 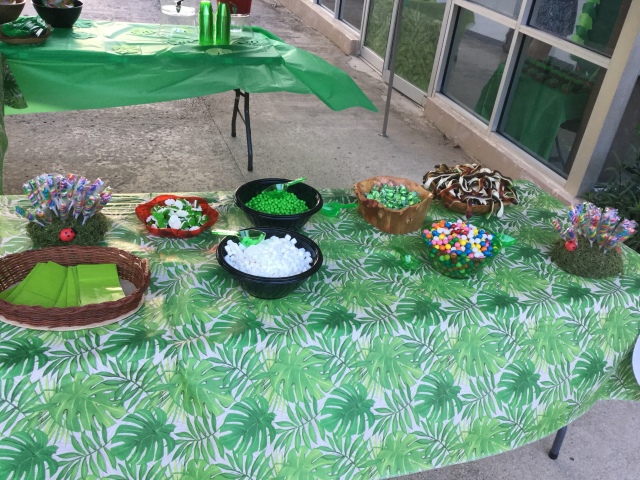 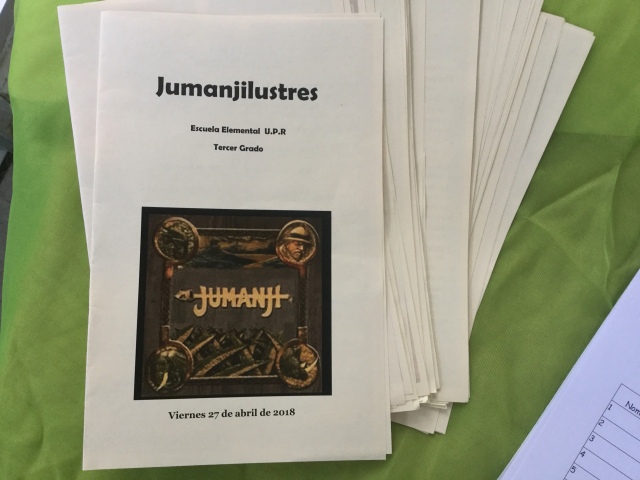 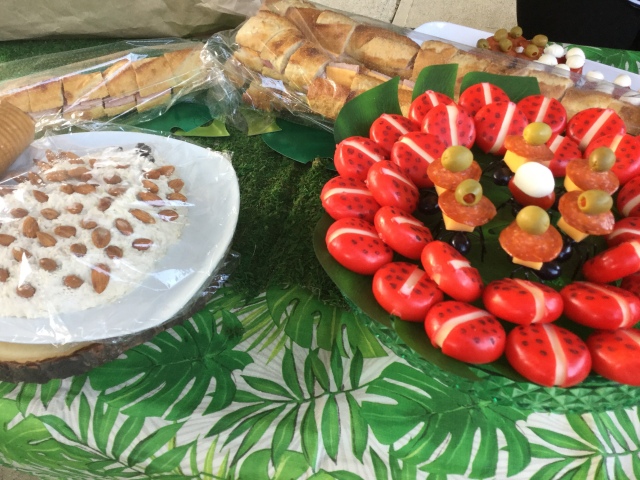 The first activity of the night was a living museum (students dressed like some historical people). After that they participated in a play. After the play, they had a music recital with flutes. You can see in these photos how packed was the music classroom were all these activities happened!: 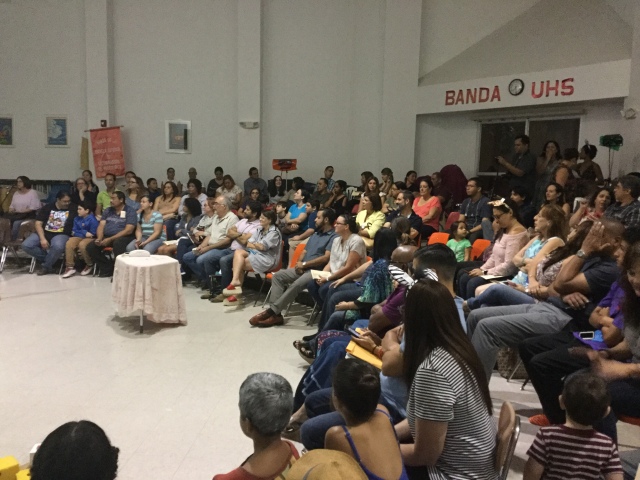 After the music recital they had dinner, and after that I made an activity with them: a ceramics workshop. We created a clay medal to celebrate what we do best. For example: some made a medal with the inscription “best singer”, or “best student”. There were varied medals. At the end, I kept them in ziploc bags in order to prepare them for the clay oven. My ceramic’s professor helped me a lot with the process of designing the workshop and simplifying my ideas. We had a lot of fun, and they learned to apply the superlative “best” (almost all of them got that superlative adjective wrong in the comparative and superlative adjective test because it’s irregular). Here are some pictures of the medals they sculpted in the ceramic’s workshop: 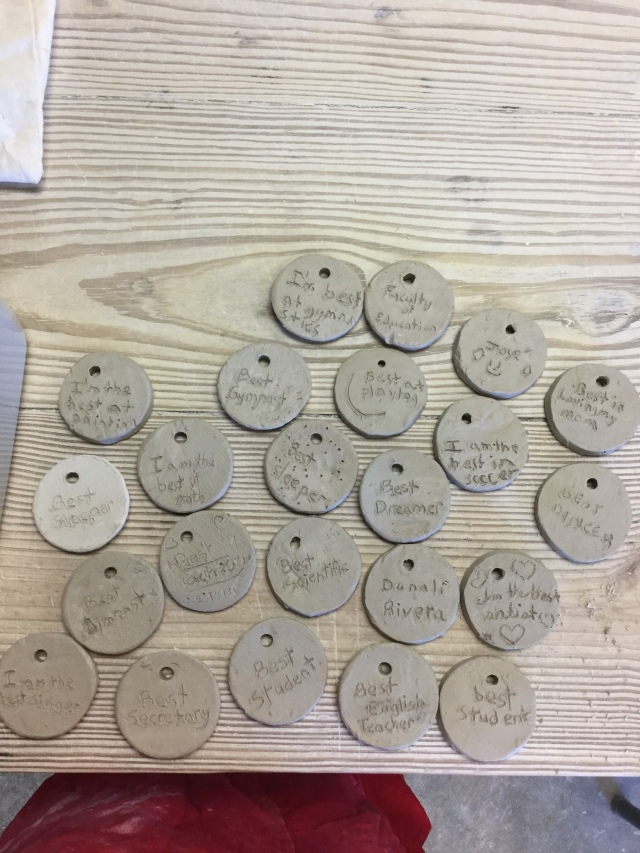 After the ceramics workshop they had a movie night with popcorn included. They chose to see “Lego Movie”. They began to fall asleep during the movie. I stayed awake until 2 am and there were still voices speaking in very low tones at that hour, but they were very few. Almost most of them were already sleeping.

They woke up at 7:00 am (the parents and teachers woke up around 6:00 to help to prepare everything they needed) with soft hits of pillows given by the teachers. They were too tired to fight the teachers back. After they woke up we suddenly became sleeping bag packing experts: the parents (some parents stayed with us, but not all of them, some arrived early in the morning to prepare the breakfast) and teachers needed to pack around 15 sleeping bags (they were 19 students, and most of them brought sleeping bags) as fast as we could to re-organize the classroom. Meanwhile, the students changed clothes and had some hygiene time. After parents, teacher and students finished to do our respective things, the breakfast was ready. We shared everything with a great joy due being together. We all helped to clean and leave everything as it was before the sleep over. The students played a little bit, received some gift bags, and shortly after we all left.

At the beginning of this week the students kept working with their Project Based Learning (PBL) activity. My mentor teacher explained them that his is a good example of team work, because creating this e-book needed the participation of everyone to be a success. Each one created his or her page, and then began working in their tomorrow’s oral presentations. I created a graphic organizer for helping the students to prepare their oral presentations. Here is a picture of the graphic organizer:

The sleeping over and the PBL had been two amazing opportunities for us to experience how to teach and learn with a different approach. I am very grateful for both opportunities!